Incredibly, in 2010 the Squadron did it yet again! The Foster Trophy went to Flt Sgt Katie Roberts and the Currall Trophy to Cpl Christopher Perry. In fact they both had the same score of 169 out of 175 and the winner had to be decided on scores attained in the Senior and Staff exams.

2010 also saw 146 become the Wing nomination for the Lees trophy and were inspected by Group Captain John Middleton in April 2010.

To top that, in 2011 the Squadron were awarded them again! The Foster Trophy went to Cpl Jordan Byrne and the Currall Trophy went to Cdt Jonathan Dodson. In fact Cpl Byrne was the first ever cadet to score the perfect score 175 out of 175 in the whole Corps!

Five times the Squadron has gained the highest academic scores in the whole Corp – approx 40,000 cadets in 1000 Squadrons. A testament to the high standards that 146 aims for.

In October 2011 there was a local restructure within the Corps which resulted in 146 being transferred from North Region, East Cheshire and South Manchester Wing to Wales & West Region, Merseyside Wing.

In 2014, a new housing development on Queen Street was named Pardus Walk, after the Squadron’s motto! The development is located next to the Old Squadron site. The housing estate built on the Squadron footprint was supposed to receive this name, but wasn’t due to a communications issue at the Council offices! 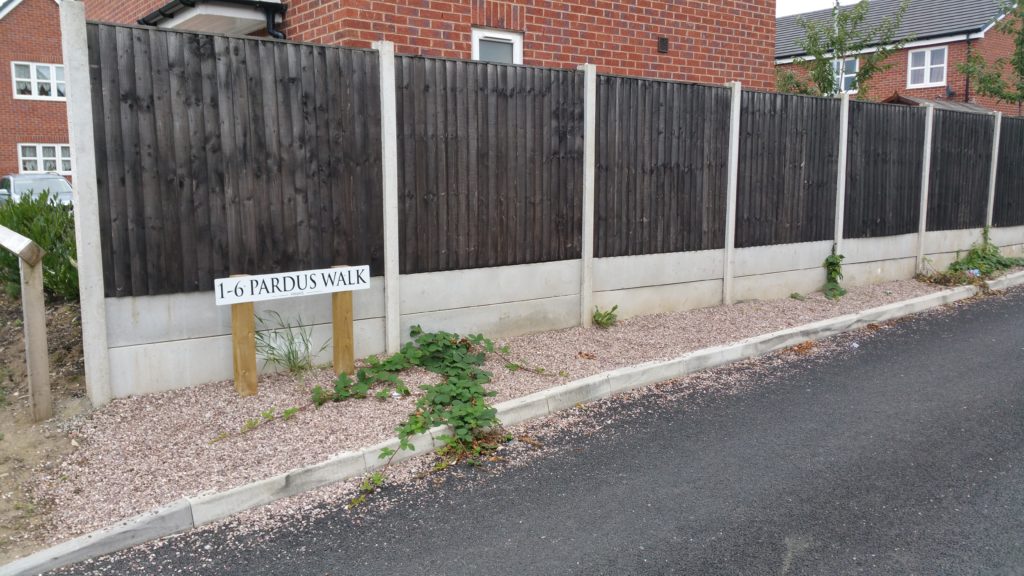 In September 2015, after creeping up the positions for Best Squadron in Merseyside Wing, from 22nd in 2013 and 5th in 2014, 146 went on to win outright in 2015! Also on the 2015 Wing Training Day, Sgt Indie Mackintosh was selected as best female cadet in Merseyside Wing!

In September 2015, the promotions of CWO Chris Yale and Chris Houghton, joining CWO Dominic McGough, brought the Squadrons CWO count to three, for the first time in 20 years.

For 2015-2016, 146 Sqn was nominated as representatives the the Lees Trophy for Merseyside Wing and then for Wales and West Region, leading to inspections by Group Captain Richard Allen and Air Commodore Dawn McCafferty! Although not finishing in the top two Squadrons, the Squadron celebrated this huge achievement with a night of zorbing with Cheshire Zorbs at Cheshire Police HQ.

Yet again for the year 2016-2017, the Squadron was nominated as Wing representative for the Morris Trophy.  The switch in trophies was due to a change in the way they were awarded, the Morris now for larger Squadrons.  The Squadron was inspected by the new Regional Commandant, Group Captain Roger Simon.

In February 2016, Wing Commander Les Keane, saw fit to promote Flt Sgt Indie Mackintosh to CWO. She was also put forward for the Duke of Westminster award, making the top 40, was IACE candidate for Merseyside Wing and Dacre Broach nominee.  She was also awarded the Keith Dobie Trophy in September 2015, for Best Female cadet in Merseyside Wing.

At Wing Field Training Day in 2016, Northwich Squadron took home both the Keith Dobie and Clive Wright trophies, for best male and best female cadet in Merseyside Wing.  These were won by CWO Charlie Hensby and CWO Lizzie Barr.  As a consequence, they were both awarded an IACE trip, which took place in 2017.  CWO Hensby Travelled to Turkey and CWO Barr to the USA.

In the second half of 2017, two 146 staff members were appointed to Wing roles.  Fg Off Sarah Ross was appointed as Deputy First Aid Officer and Fg Off Martin Moores as Deputy IT Officer.

2017 also saw the Squadron say goodbye to two long serving members of staff.  Flt Lt Tim Lloyd moved to 95 Crewe Squadron in March, to take over as Commanding Officer, after 27 years on the Sqn!  Mrs Aileen Alford also stood down from her position on the Civilian Committee on the 20th of June, after serving in various capacities for 35 years.

2018 was host to a historic event for the Squadron, as it was decided to retire and lay-up the Air Defence Cadet Corps Banner. 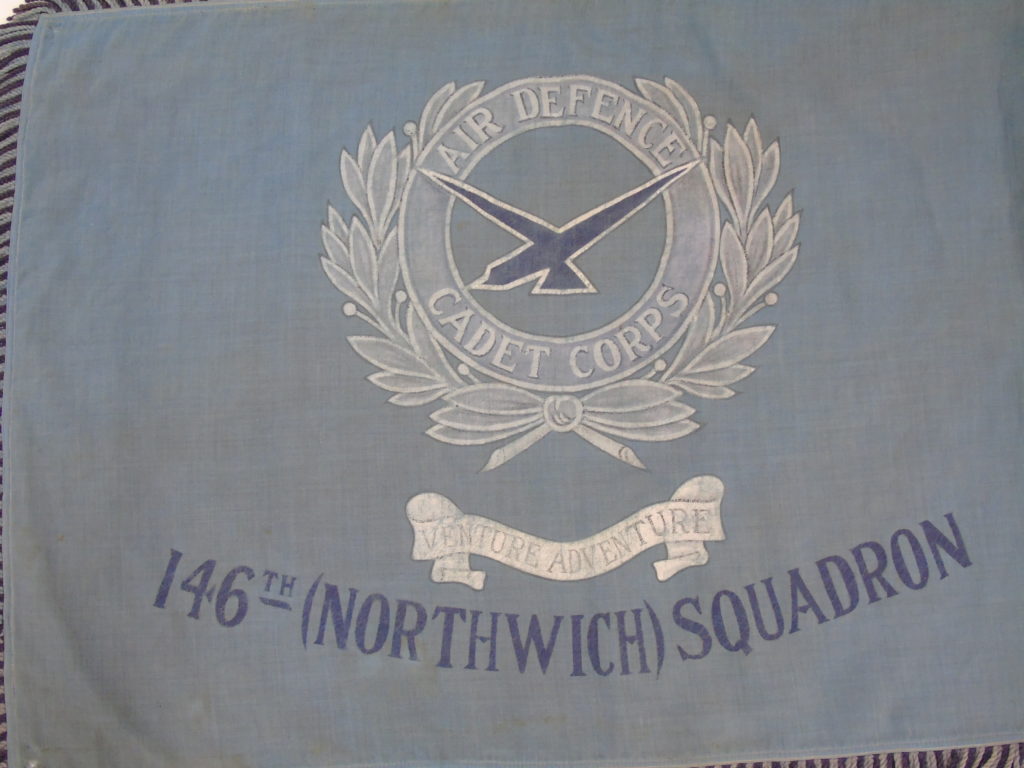 The retirement parade and service took place in July and was attended by Wales and West Regional Commandant, Group Captain Roger Simon and Merseyside Wing OC, Wing Commander Chris Ashworth.  We were also joined by some ex-cadets, including Eric Lare, Ted Cross and Leanne White 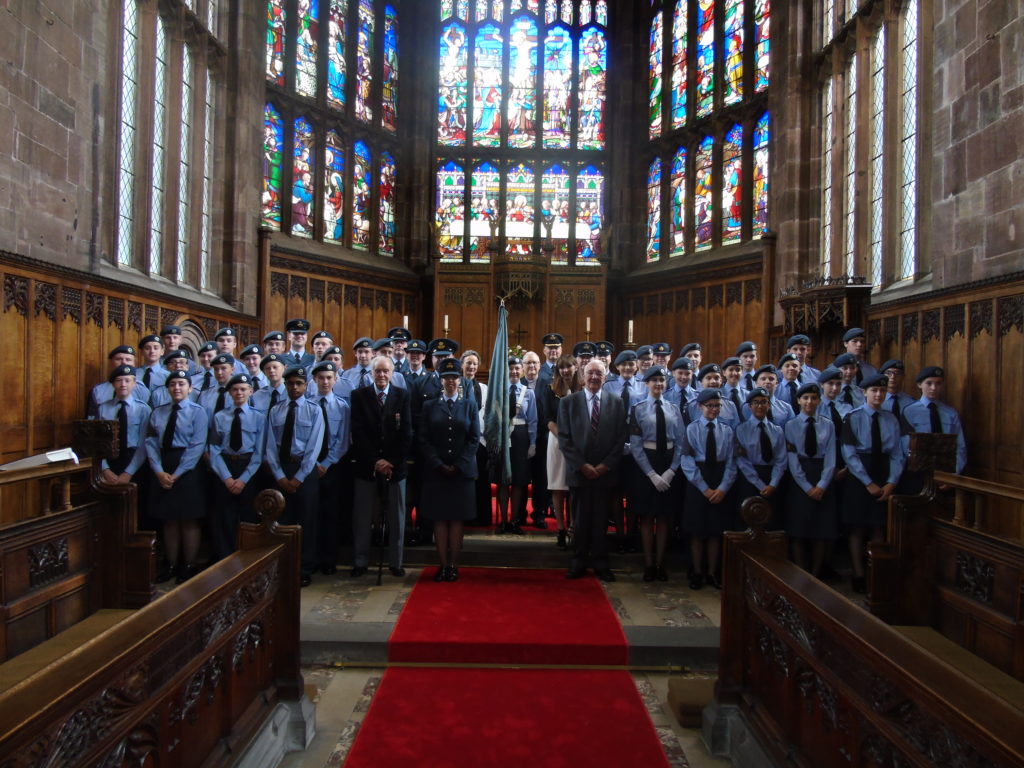 The banner will be framed and cased, to put on display at Squadron HQ.

The legacy of ex-commanding officer, Flt Lt Ray Alford still lives on, with the annual presentation of the Alford Trophy at the Squadron’s annual Battle Of Britain dinner.  In 2018, the trophy was presented to Cdt Lewis Heald.  This was coincidentally a very significant event, as the dinner took place on the 14th of September, Cdt Heald’s 18th birthday.  This was also just one day past the 18th anniversary of Flt Lt Alford’s death, on the 13th of September 2000.  Ray’s wife Aileen was in attendance at the meal and presented the trophy. 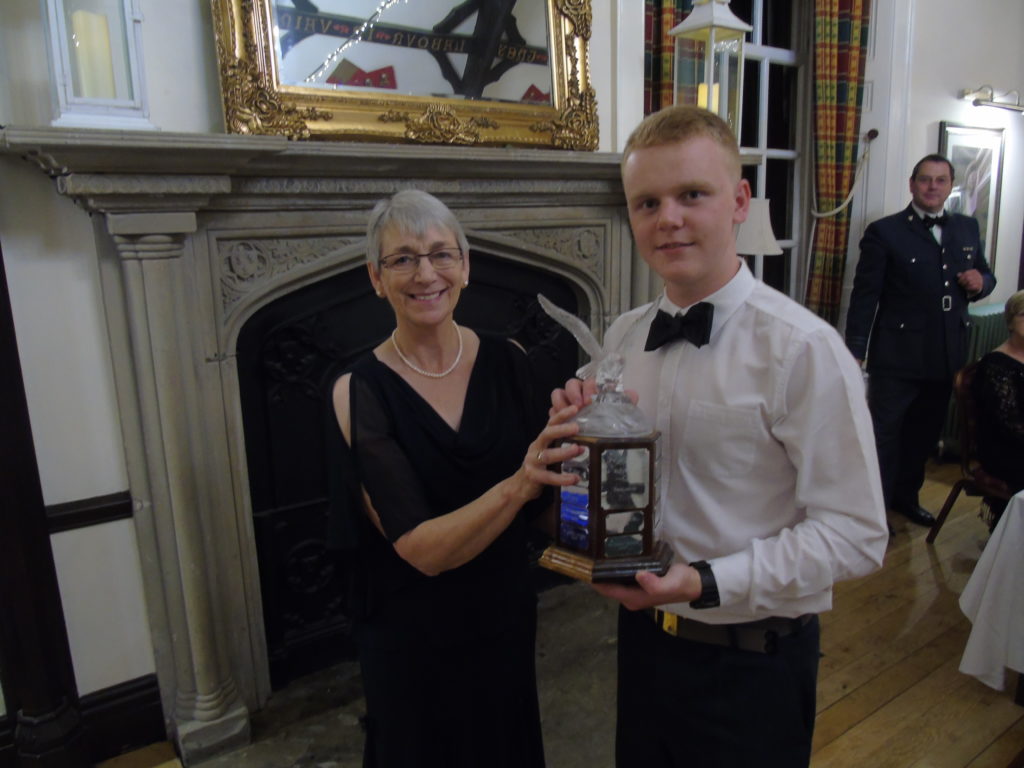 To finish the year, in December, another of our senior cadets passed application and interview to become Cadet Warrant Officer.  The Squadron had been without a CWO for some time and was pleased to welcome CWO Jessop to the role.

2019 turned out to be a bumper year for new staff at the Squadron, with four new “recruits”.  Amy Wilson and Jordan Brown moved to the area from Kent, previously from 2433 Ramsgate and Manston Squadron.  Ex-CWO Rebecca Dutton also stayed at the Squadron as staff and ex-RAF Lawrence Black joined 146 as a Civilian Instructor.

FS Emily Holmes was selected to carry the Corps standard, as part of the annual Drill and Ceremonial camp 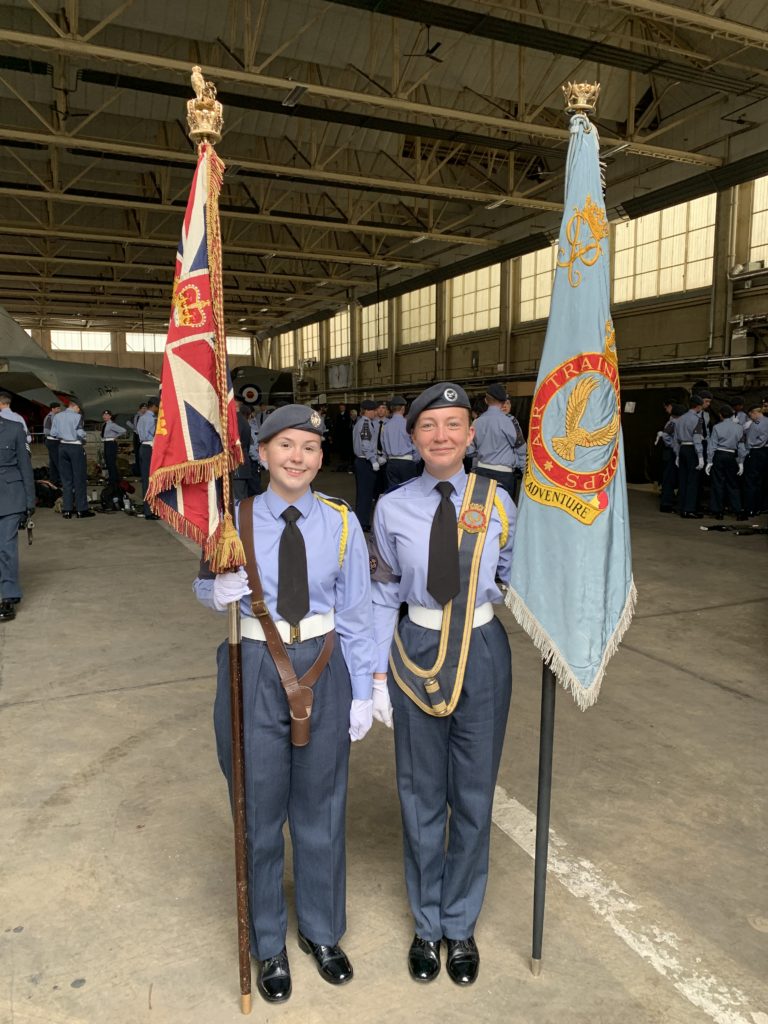 Towards the end of 2019, the Wing’s annual training day proved to be a huge success for the Squadron.  146 was awarded the trophy for best overall unit in Merseyside Wing, as an accumulation of points from all other awards.  Other notable trophies included 1st place in the banner competition (for the first time ever!), 1st place in under 16 aircraft recognition, 1st place in the full and overall band competitions and 1st place for the overall DofE trophy!  Further, FS Sammy Dutton won best female cadet in Merseyside Wing and FS William Holland placed in the top six. 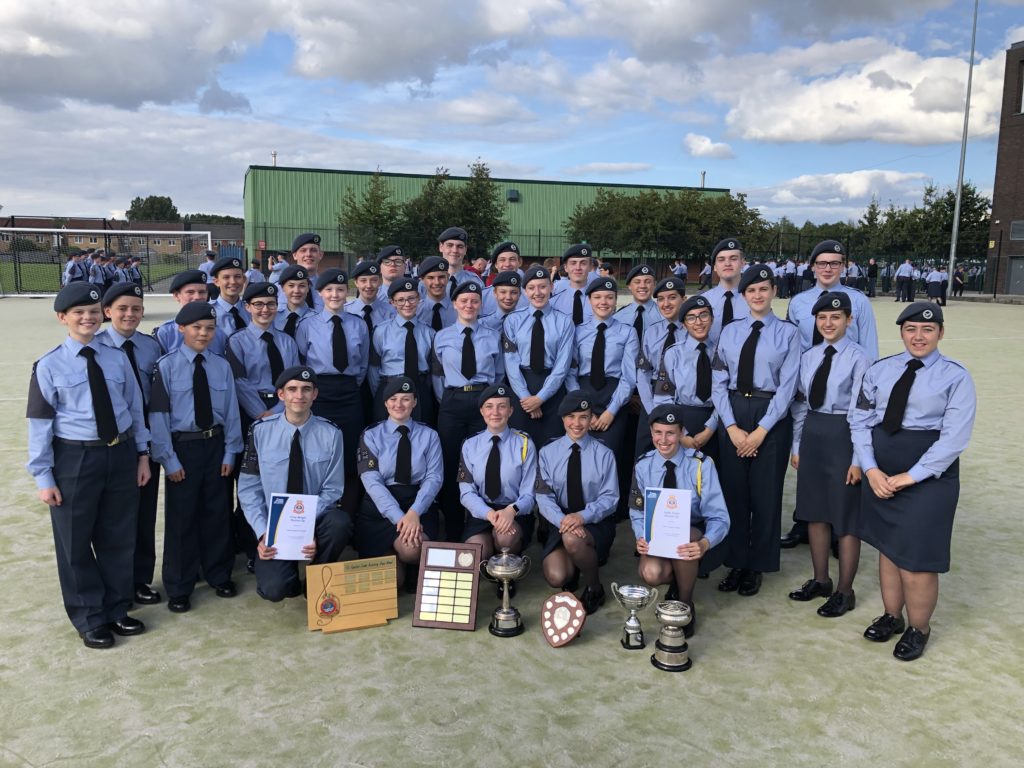 Towards the end of 2019, cadets Sammy Dutton and Will Holland were promoted by Wing to Cadet Warrant Officer